I recently completed an Asterisk VOIP system for our clinic and thought that these flow charts may help someone in figuring the terminology out! I started from scratch and really battled, but the result was worth it!

While these flow charts may not be perfect, they will help you get an understanding of the basic processes. Any comments that add positively to them will be more than welcome! 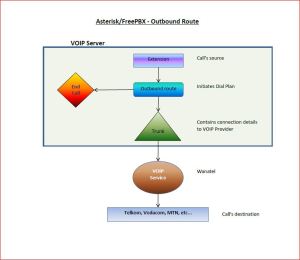 I was seriously considering do a ride to a ‘Rally’, called the Giraffe Run (with a real Giraffe!) in Zimbabwe, when a friend emailed me this story from a friend of his.

Now I know it has nothing whatsoever to do with biking, but its so typically African, I couldn’t resist including it here! And to live in Africa you really need to have a strong sense of humour! Forgive me, bikers!

I had an email from a friend in Zimbabwe yesterday and she sent me this picture and story that I thought was delightful. They had been away at a game park and on the first evening while sitting in front of the fire in the bar, in walked a fully grown warthog.
He walked over to the bar and without a word the bar man handed him a pillow. He took the pillow, put it next to the fire and promptly lay down with his head on the pillow and went to sleep where, apparently, he spends the cold nights. Then in the morning, he’s off into the bush again! My friend says that if the barman isn’t there he will grab a pillow off one of the couches!”

The 2013 Bulldog Rally was an interesting experience.

I had never been to a rally before, so I was intrigued to see what actually went on, what kind of people attended and why did they attend these rallys.

Obviously the common thread was biking. However, a few there didn’t seem to see the necessity in actually riding their bike there. Even if East London was merely 80ks away!  Therefore, some bikes arrived on trailers. Others were just ‘forgotten’ at home and the car was used! What happened to the enjoyment and excitement of the ride there and back? 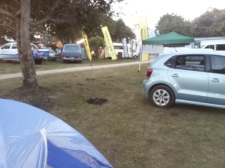 Another thing that stood out was the general age of the group. Most people were well over 40. This fact was confirmed by the ’70s music that often played across the campsite. In my youth (late ’70s), rallys were attended by young ‘holligans’, not by ‘old ooms’!)

One thing that hasn’t changed since the ’70s rallys is the drinking of large amounts of (mainly) beer. It carried on non-stop from morning to night. One obvoiusly well-to-do +60s gentleman, in all his biking ‘colours’ was leaning against the tent pole awaiting his turn to get a tatoo with ‘all sheets to the wind’. He had no idea what picture he was going to get tattooed with and how he’d look in the morning!

Another thing that hasn’t changed is the ability of some idiot to wreck good machinery. You guessed it! The cold-engine-full-throttle-backfiring guy! You think with bikes costing upwards of R100k guys would use their common sense. But no! At least one ‘biker’ had a genuine reason to use a trailer to take his beloved bike home!

The program that Saturday included drag racing, indoor rugby and sports. That night there was a burn-out demo, which was good, albeit late to start. This was followed by the prize giving, which went off well, with a lucky draw of R15000 being awarded. I won the ‘Longest Distance Covered’, as everyone seemed amazed that someone would ride that far (1541kms)! That was followed by live music from a band called Purr.

Sunday morning saw everyone packing up early to leave.

Generally the Bulldog Rally was well organised and enjoyable. Am I going to shoot off to the next local rally I can find? No, not likely, but maybe I’ll do the Bulldog next year, because its actually all about the ride there and back that counts! And that ride from here is long, hard – and fantastic! 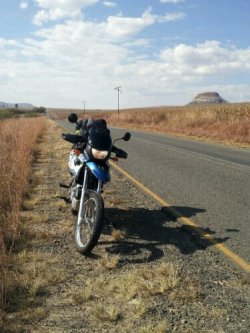 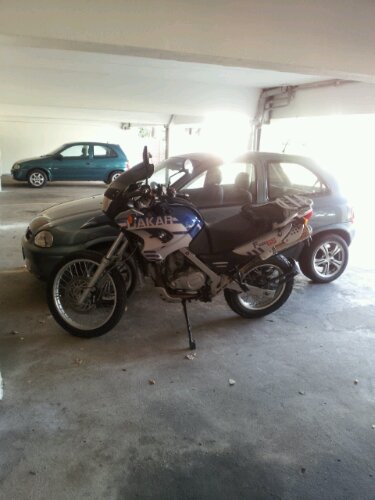 The trip from St Lucia to home was a well-known route to myself and had been covered many times in the past. This time, however, I would be following my wife’s little compact Opel Corsa home. It had had a leaking fuel filter on the way down, and although it had been repaired, it was best that I kept in contact. It would be slow!

The road from St Lucia to Pongola is a pretty boring, and mostly straight, road. Even the pineapple-sellers have been banned from the road. The only wake-up calls are the huge trucks that thunder up and down the road, and the incessant coastal wind that threatens to deposit you in the drainage ditch at the side of the road! Otherwise its just boring. 188kms with little to keep a biker interested!

One gets glimpses of the huge Jozini Dam through the bush after about 140kms, but thats all! After Pongola it winds its way through a spreadout rural village, where speed must be reduced to 80km/hr, or sometimes even 60km/hr, before eventually leading into Piet Retief.

At 7:30am I left the guest house, Gecko’s Place, after a wonderful stay and day of rest, and headed up the dirt road next to the sea. The waves were breaking just over 50m to my left until I turned and headed up the estuary gorge to the main tar road. As I rode the mist swirled down the valley, making for a spectacular sight.

Just before 8am I turned onto the Lusikisiki road. I was idling along at only 80km/hr, enjoying the sharp twisting curves that looped this way, then that. The road surface was excellent. Caution was necessary to avoid straying near the center of the road as often vehicles from the opposite direction would be well over the line.
My fuel light came on just before Lusikisiki, so I stopped there to fill up.

As I climbed up the escarpment again it became colder and my handle heaters stayed on most of the trip. Soon after I passed through Flagstaff, where the traffic was chaotic, and then onto the town of Bizana. The road was generally good as it dropped back down to the coast, with the occasional pothole popping up unexpectedly.

Soon the sea appeared in front of me again as I approached Port Edward. Then I was onto good roads, which soon became the N2 North highway. For the next 400ks bad roads were a thing of the past!

After 3hrs of riding I pulled into Scottburgh to refuel the bike and myself. From there it was 120km/hr all the way to St Lucia.

Rain threated all the way from there and the roads were wet most the way. I only passed through one minor shower as I bypassed Durban. I was lucky, especially as I neared the end of the trip. Showers were falling everywhere around me!

After about 600ks, and 7,5hrs on the bike, I stopped at St Lucia to join my wife for 3 days before we would leave for home.

It had been an amazing ride! 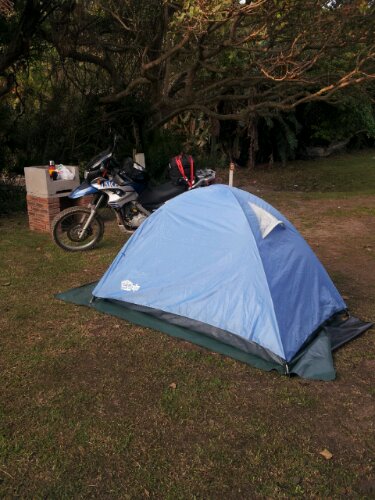 After a loud night at the Rally, with more cars than bikes driving past the tent, I packed up and left by 9am for Port St Johns. It was just 320kms to go for the day.

I followed the route back to the Great Kei (Kei must mean corners in Xhosa) and then on to Mthatha (200ks), the old Transkei capital. From there it was a right turn to Port St Johns, about 90ks away.

Again the wind was howling and road works were in progress everywhere after the Kei. The 200 ks took about 3hrs. I wound my way through the unpredictable traffic of Mthath to the turnoff to Port St Johns. From there its was just awesome curves again, going from the high plateau down to the wide green river valleys emptying into the sea.

If I was expecting a beautiful coastal village at the end I was wrong. It was a town in a shocking condition.

Luckily my accomodation for the night was a caravan in a lovely garden across the river at Geckos Place. To get there I had to follow 7ks of (again – you guessed it!) bad dirt road. The old couple that owned the property were very hospitable and couldn’t do enough to help! Great to be welcomed like that. And they would only accept R100 for the 2 nights!

After a very welcome rest day, I plan to set off for an overnight at Port Shepstone.

After a bacon and eggs breakfast I left Ugie at 8am with the temperature down at 3,5°C!

Soon, however, it was up to 20°. I was now entering the Transkei and small houses and huts dotted the landscape everywhere. The road curved downwards towards the coast, with corners that put Mpumalanga roads to shame! When the road flatten out the wind from an approaching cold front literally would try rip your helmet off! I was often holding my helmet at the front with my left hand to keep the speed at 120ks/hr.

I passed through many Traskei villages. The roads in the towns were normally bustling with people and vehicles of all shapes and sizes, especially as it was monthend. Road rules had yet to be discovered here and it was a case of each for himself! I really felt like a foreigner here, especially on a bike! Very interesting places, but what if I had a breakdown here?

After about 200ks, and numerous Transkei villages (and about 20000 taxis) I turned onto the N2, heading west. Kei Mouth was about 100ks away. Again the road featured some amazing curves, especially the down and out of the Great Kei Valley. Here you drop down about 300m to the bridge that crosses this amazing river. At the bottom is a Shell Ultra-City, where I pulled over for a Coke, after the battering from the wind.

About an hour later the sea showed up ahead as I pulled into Kei Mouth and the 2013 Bulldog Rally, but that’s another story!